Have you ever considered how important a transplant could be to your own life? Organ donation is something that affects us all, you never know when you or a loved one may need a transplant.

We’d like to share with you the story of Allan Jones, a True Potential Wealth Management Client. In 2014 Allan started suffering from breathlessness for extended periods of time, and he was eventually diagnosed in January 2015 with a condition called IPF (Idiopathic Pulmonary Fibrosis).

This was devastating news for Allan, with the doctor informing him that his life expectancy would be around two years. Faced with this excruciating reality, Allan started a bucket list and began ticking off a number of experiences. “Part of our bucket list was to go on a cruise to the Caribbean and visit NASA, all this was done while I was oxygen,” Allan says.

Allan had been told he was not suitable for a transplant, but his story goes to show that hope is never lost. In January 2016, he was asked if he wished to join the list for a lung transplant, and he was then added to the list in May 2016.

Amazingly, just a few months later, in August 2016, Allan got a phone call at 6am in the morning. His own miracle was about to take place, he was told he had to travel up to Manchester for a potential transplant. Allan successfully completed his single lung transplant, on the same day as his Ruby wedding anniversary. 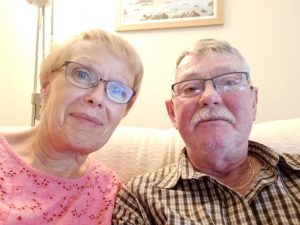 “My wife was so important throughout this journey,” Allan emphasises, “we got through this together as a team, and now she attends all of my appointments with me.”

“I’m so grateful to the excellent transplant team at Wythenshaw,” Allan says, “without them I wouldn’t be here today.”

It is stories like Allan’s which inspired True Potential to support the World Transplant Games 2019 in Newcastle and Gateshead. All athletes competing have had lifesaving organ or tissue transplants, or are living donors. The legacy of these games will be to raise awareness of the need for more organ donors, which is as simple as signing the NHS Organ Donor register today. It only takes a minute, but it could be worth a lifetime to someone. In fact, you could save up to nine lives. Remember to share your decision with your family, to ensure your choice is known.

It was our pleasure to speak with Allan and learn more about his transplant journey, and we were also pleased to hear that he has found using True Potential straightforward and thinks highly of our company and his adviser, Paul Anderson.