Trade tensions between the United States and China have dominated the global trading landscape since the imposition of tariffs by the United States on China in March 2018. The antagonism which has characterised one of the world’s largest trading relationships for the past year escalated this week, ultimately resulting in the US labelling China as a ‘currency manipulator’. Almost immediately after the US announced tariffs on additional goods, the Chinese currency, the Renminbi, surpassed the psychologically important level of 7.0 Renminbi for every 1 US dollar. 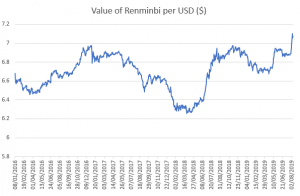 China’s currency has two names – Renminbi and Yuan. The terms are interchangeable, like Sterling and the Pound. Renminbi is the official name of the currency.

The exchange rate system they have is managed differently from most developed economies, which allow their currencies to float. They have a system whereby their currency is ‘pegged’ and expected to move gradually within a narrow band against the US Dollar. This means the monetary authorities, under the guidance of the People’s Ruling Congress (PRC), are very keen to take an active role to maintain a relatively stable exchange rate. This restrictive system has been in place since 1994, although there have been periods when they have experimented with a managed float against a basket of currencies.

The current fixed rate or ‘pegged’ approach has been a key element helping China’s economic rise. It has, arguably, allowed the value of the Renminbi to be artificially weak. A weak currency allows goods to be more competitive on the world stage leading to higher exports and, in this instance, China’s manufacturing sector has certainly flourished. It is now the largest in the world. Nobody really knows what the true value of the Renminbi would be under a floating system with the rate set by market forces, but China’s currency is generally considered to be undervalued.

The growth of China over the past two and a half decades has been remarkable. When the rate was first pegged back in 1994, one dollar could buy 8.69 Renminbi and in subsequent years the Renminbi remained very stable. However, from 2013, as the economy really got going and the trade surplus expanded, the Renminbi strengthened hitting a peak level. At this peak, one US dollar could only purchase 6.05 Renminbi.

The fact that the currency is now depreciating isn’t new, and neither is the accusation that China is a currency manipulator. Previous US administrations have decried the practice of currency depreciation (as far back as 2003) saying depreciation occurs at the expense of US manufacturers.

Concrete steps to designate China as a currency manipulator is not without consequences. China must engage with the International Monetary Fund (IMF) and the US to assess steps which can be taken to value the Renminbi more fairly. Whether this endeavour is fruitful for the US is doubtful, as China can point to legitimate economic reasons for the fall in the Renminbi’s value, including the effects US tariffs are having on demand for Chinese goods.

“The longer-term effects of further weakening of the Renminbi represents a challenge to the US as many of the policy mechanisms at Trump’s disposal have already been enacted. It also poses a broader threat if regional competitors take indirect action to lower the value of their currencies; a round of ‘competitive’ devaluations isn’t helpful for global trade flows.

It remains unclear whether the present dispute will escalate to the point described above. Economic and political self-interest may dictate a resolution of some of the present antagonism. US Presidential elections scheduled for November 2020 make it unlikely the current administration will wish to intensify tensions much further given the negative ramifications it is likely to have on the broader US economy. Also, we should not forget that China is intent on rebalancing its economy, seeking less reliance on cheap manufacturing in favour of faster growth in services and domestic consumption. Finally, the labelling of currency manipulator doesn’t sit well with Chinese leaders.

While the dispute rages both economies are moving forward. The US’ dominant services sector remains expansionary, with PMI data outstripping analysts’ expectations. A figure of 50 or over indicates continued expansion, as displayed below: 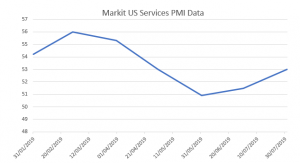 Likewise, Chinese export data remains positive and continued an upward trend in July, meaning the value of Chinese exports grew by 64% since February 2018.

The actions taken by the US and Chinese authorities are reflective of simmering tensions between the world’s two largest economies, not just related to trade but also technological leadership with China showing signs of moving ahead of the US in key areas.

It remains to be seen whether the latest escalations will create a permanent era of trade restriction between the US and China, or merely represents a negotiating ploy to enact pressure on each country’s respective leadership.

Fundamental economic data from both economies indicates the simmering tension has yet to boil over and affect the underlying health of either economy.