Boris and Donald’s Weekend in Biarritz

On Friday, the leaders of seven of the world’s major economies will convene in the French resort of Biarritz. Nations taking part are Canada, France, Germany, Italy, Japan, UK and USA.

This G7 summit has the potential to be the most interesting to occur in several years. For Boris Johnson it marks his first major foreign engagement as Prime Minister. It also provides an opportunity for him to informally press the case for changing the terms of the UK’s impending exit from the European Union.

G7 meetings tend to be cosy affairs with a pre-set agenda. But, this time, a disharmonious atmosphere, mostly created by Donald Trump, is evident ahead of the summit. There are several fault lines dividing allies, mostly centred on the terms of trade. This is creating tension and threatening the seemingly unassailable belief in the virtue of multilateral, economic engagement i.e. the serving of common interests.

The clearest indication of the gulf between the members is on trade. President Trump’s desire to adjust the US’ balance of trade, the difference between a country’s exports and imports, is a significant pledge of his ‘America First’ platform and a cornerstone of his 2016 Presidential campaign.

Trump views the US’ negative balance of trade as tangible evidence of unfair practice. Speaking at a campaign rally this week the President, characteristically, did not hold back when he said “The European Union is worse than China, just smaller. It treats us horribly.”

Whatever the veracity of Trump’s interpretation, it is true that the US has a large trade deficit relative to its trade partners. Statistics from Eurostsat showed the US’ trade deficit with the EU deteriorating. It expanded by 11% to $83 billion for the first six months of 2019.

US Half Yearly Balance of Trade with the EU 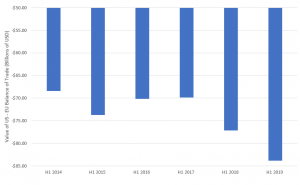 Trump’s approach to trade negotiations with Europe is to expose the competing priorities of France and Germany. French resistance to opening EU markets to agricultural goods from the US and Germany’s desire to avoid US tariffs being applied to goods exported from Germany are being used opportunistically against them with Trump threatening to declare auto imports from the European Union as a national security threat i.e. an excuse to apply tariffs

German Exports as a % Share of Gross Domestic Product (GDP) 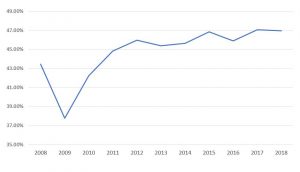 Germany’s famed industrial capacity is already encountering serious headwinds and it explains the now evident downturn in German GDP in Q2 of 2019. If not addressed, a further contraction is likely and Germany will enter a technical recession if Q3 GDP is negative. 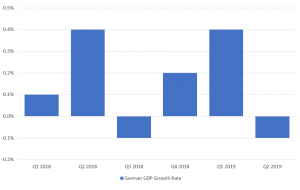 Caught between President Trump’s determination to open European markets for US agricultural goods and France’s resolute opposition to any foreign competition for its domestic producers, a sizeable fiscal response looks likely. Talk has already started to surface about a €50bn stimulus package being readied by German Finance Minister Olaf Scholz.

France itself hasn’t escaped Trump’s gaze. French plans to levy a ‘digital services tax’ on American internet giants such as Amazon, Google and Facebook have been countered by Trump threatening tariffs on French wine. Wine is France’s second biggest export product and the US market, in value terms, accounts for 18 percent of all French wine exports; France’s largest market.

Implications for the UK

With the date of 31st of October looming, both the UK and EU are entrenched in their respective positions on Brexit. However, headwinds for the EU’s two major economies could help focus minds. The last thing Germany and France need now is yet more disruption. Although the outward signs are not promising, motivation to reach a deal with the UK, which remains a significant export market for France, Germany and the wider EU, has taken a new twist. It is has suddenly become more urgent for the EU to reach a sensible trade agreement with the UK.

Global co-operation among traditional allies is being challenged by entrenched divisions on a variety of issues, with trade imbalances being the most economic significant.

The G7 summit may well expose these fractures starkly, but it also offers a chance to resolve them.

Whether US agitation with France and Germany over trade is the catalyst for EU resolve over Brexit to finally crack remains to be seen.  For UK Prime Minister Boris Johnson, the summit represents a potential opportunity to press his Brexit agenda and garner concessions from his European counterparts.

Regardless, the clear policy distinctions between the members will ensure this summit will be memorable.