Central Banks – all you need to know in one note!

Home Our Blog Central Banks – all you need to know in one note!
Share this page

Four of the world’s most influential central banks issued policy statements this week. The United States Federal Reserve Bank (the Fed),  the Bank of Japan (BoJ), the European Central Bank (ECB), and the Bank of England (BoE) all made announcements following weeks of feverish speculation regarding their intentions.

The global growth backdrop is generally favourable, with world Gross Domestic Product (GDP) close to trend, but growth is slowing down and projected to fall from 3.51% to 3.18% for 2019. 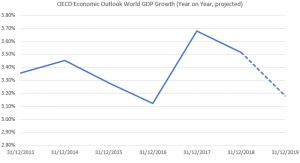 In the US, the ever-mercurial President Trump continued to display his lack of deference for convention in matters of monetary policy. He is far from happy about growth slowing and he re-tweeted his strong views on Tuesday, on the eve of the Fed’s policy decisions:

Even allowing for Trump’s propensity to antagonise politically it is becoming increasingly evident that he is keen to let his views be known on monetary policy; not just in the US but globally too.

As shown earlier in our chart global growth is still going strong. However, it is weakening in some areas such as manufacturing which is hitting the overall rate. In this context an exploration of policy decisions instituted this week by each central bank and the accompanying statements are worthy of attention.

On Wednesday Jay Powell, the Chairman of the Federal Reserve, announced the Federal Open Market Committee (FOMC) had taken the decision to reduce the Federal Funds Target Rate by 0.25%, marking a deviation from its path of tightening. The decision taken represents the first cut in the Target Rate since the depths of the Financial crisis in 2008. At that time, the Fed embarked on aggressive cuts taking the Target Rate from 4.25% in December 2007 to 0.25% in December 2008. With a requirement to push rates to unprecedented levels it shows just how policy makers have struggled to tackle adverse economic conditions in the current cycle 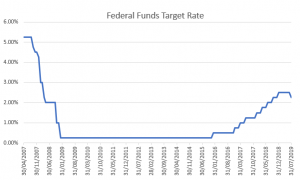 Powell gave a temperate assessment of the prospects for future cuts, characterising the present cut as ‘essentially a mid-cycle adjustment to policy’. He seemed eager to dampen expectations of a ‘lengthy cutting cycle’. The important aspect for investors is he didn’t rule out further adjustments entirely.

In his remarks Powell suggested fundamentals for the US economy, such as the unemployment rate remain positive with domestic US economic growth continuing at a ‘healthy pace’. He said the main purpose of the cut was to buttress the US economy against weakening global growth and escalating trade tensions.

The decision of the FOMC, and Powell’s subsequent comments, did little to placate the President who is seeking further dovish policy to support his administration’s contentious trade policies.

The interest rate cut this week was largely anticipated. The US Treasury yield curve – a measure based on the difference between the yields on three-month and ten-year Treasury bonds – hardly budged and while it continues to exhibit a negative position, it should improve once the weakening growth trend stabilises.

Spread between 3 month and 10-year US Treasury Yields 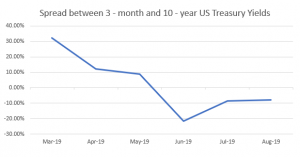 In contrast to the Fed’s decision to cut rates, the BoJ maintained its interest rate of negative 0.1% on Tuesday. However, Governor Haruhiko Kuroda signalled a renewed readiness to cut rates if the Bank’s 2% inflation target is substantially at risk of being missed.

The BoJ downgraded its growth forecast for the Japanese economy by 0.1% to give a rate of 0.7% for the year to March 2020 highlighting continuing tensions surrounding global trade as a key risk to the economy.

As an export-oriented economy, the risks of any further deterioration in trading relations are particularly acute; coming amid a bubbling trade dispute between Japan and South Korea. Until this new area of tension emerged, trade friction between the US and China caused difficulty for the region more generally.

Japan’s industrial production fell by 3.6% in June showing the effects now emerging. However, the positive signals of readiness to act emanating from the BoJ are welcome. 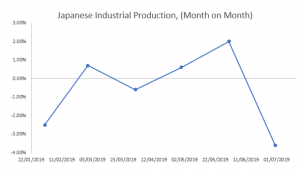 On Thursday the 25th July, the Governing Council of the ECB announced it would hold its main refinancing rate at 0% and its deposit rate at negative 0.4%. In a press conference following the meeting, the departing ECB President Mario Draghi hinted at a last package of stimulus measures in September. In a similar sentiment to the BoJ, Draghi conveyed the determination of the Governing Council to act if the ECB’s medium-term outlook for inflation did not match its target rate.

Outlining the key risks to the Eurozone economy, Draghi fore-shadowed the views conveyed by the BoJ. He highlighted continuing trade protectionism as a factor weighing particularly heavily on the manufacturing sector of the Eurozone and growth more broadly.

Like his Japanese and European counterparts, the Governor of the BoE Mark Carney revealed the Monetary Policy Committee had decided to keep the Base Rate steady at 0.75%.

The Bank reduced its growth forecast for both 2019 and 2020 to 1.3% in each year and revealed lower confidence in the broad economic outlook for the British economy. Whilst the Bank explicitly omitted any warning against a no-deal Brexit in its report, the Bank did state ‘companies expect output, employment and investment to be much lower in a no-deal Brexit.’

The Bank’s decision to hold rates steady reflects the continued uncertainty surrounding the outcome of Brexit. It appears to be prudently keeping its powder dry until greater clarification can be distilled.

What is clear from this week’s activity is all four of the central banks examined are voicing the same concerns around trade tensions and their impact on global growth. These concerns seem justified by market reactions on Friday morning to further tweets from Trump announcing his intention to enact additional tariffs on Chinese goods. The reactions were global, reflecting the threat posed by trade protectionism to the highly interconnected global economy. No nation can fully insulate itself from the adverse effects of protectionism.

More positively, the monetary policy responses this week do not appear to be coordinated in a way that tends to only occur when systemic risks are present. The stances adopted by all four major central banks are consistent with a determination to craft monetary policy to support the continuation of the present expansion and meet their inflation targets.

This highlights that policymakers are attuned to the threats facing global growth and stand ready to respond if necessary.