China Belt and Road Initiative: A close neighbour is better than a distant relative

Home Our Blog China Belt and Road Initiative: A close neighbour is better than a distant relative
Share this page

Sound bite electioneering is not a strategy of concern to the leader of a communist state, but legacy is.

Back in 2013 President Xi Jinping unveiled plans designed to serve as his legacy as the President of China and leader of the communist party. The plan was to revive the 1400-year-old Silk Road, a series of trade routes which at one time linked East and West.

The name of the project has evolved over time to be known as the Belt and Road Initiative (BRI), the belt reflecting the economic infrastructure and overland transportation routes with the road, rather confusingly, referring to the maritime sea routes. A $1 trillion 21st century infrastructure project connecting China and its Asian neighbours with Africa and Europe via sea ports, high speed rail networks, energy stations, cyber networks, airports and free trade zones.

The chart below demonstrates the rapid economic growth China has experienced over the last two decades and looking at this one may question why China cares about connecting the rest of the world?

The motivation is clear. The developments in economic growth have led to a rising level of prosperity among Chinese citizens creating greater demand, which China intends to satisfy by ensuring the continuous and guaranteed supply of goods and services. The only way it can ensure this is to own the supply chain, particularly energy, with BRI expected to cover 75% of the world’s known energy resources.

The other side of the trade is an enhanced level of prosperity among economies outside China, creating a greater demand for the export of Chinese goods and services. To ensure this connectivity China is not only the driver of many projects, it is also the financier.

The Belt and Road Initiative has been met with some criticism from the wider world, sceptical of China using this policy as a way of enhancing global dominance and considered by many to be simply an international expansion of its own infrastructure. Whilst the silk road was an organic trade path, the BRI will be controlled by China which makes those sceptics uncomfortable, particularly the United States who fear the control of ports and transport links will be used to facilitate an extension of China’s military presence across the globe.

There is also concern over the source of finance. Many of these projects have been financed by China on unsustainable terms, creating a debt-trap diplomacy.

Tales of struggles are beginning to emerge with Sri Lanka forced to grant China a 99-year lease on the southern port of Hambantota and 15,000 acres of surrounding land after struggling to repay their $1.3 billion loan, a move which brings China closer to the border of India along one of the world’s busiest shipping channels.

Malaysia has rejected $22 billion worth of finance to build rail and gas networks and Sierra Leone was advised by the World Bank to reject plans for the joint construction of a $400 million airport.

Some project plans have also been scrapped altogether, such as the $17 billion investment in the high-speed rail network linking Malaysia and Singapore.

Watching the development of the BRI over the coming years will be fascinating. China has deep pockets, cash to invest and searing ambition. President Xi’s biggest concern at this stage is to establish his legacy.

Addressing concerns around China’s motivation will be key and ensuring that finance is properly structured will be vital to ensure momentum is sustained to carve the path of tomorrow’s trade. 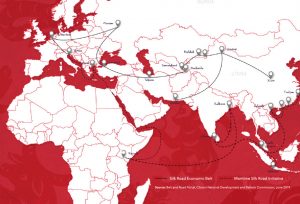 China’s modern-day adaption of the Silk Road aims to revive and extend the ancient routes. This is a mass scale project with the aim of improving access to markets, reducing the cost of doing business and enhancing economic growth for the 78 countries and 4.4 billion people involved. It represents China’s most ambitious development to date and constitutes a very clear threat to Trump’s ‘Make America Great Again’ campaign.