The price of a barrel of Brent Crude oil rose sharply at the beginning of this week following news of a drone attack on the refining facility at Abqaiq in Saudi Arabia; this facility produces 5.7 million barrels of oil per day equivalent to 5% of global oil supply. The strike was sufficiently important to cause the largest intraday spike ever recorded by the Brent crude oil benchmark; jumping 15% to $69.

Initial reports suggest the attacks were the work of Yemeni rebels, but the sophisticated precision of the attacks indicates if the Yemeni rebels had a part to play, it was with the aid of a more capable actor, namely Iran.

In our analysis of the situation we put this week’s jump in price into context, assessing the implications from an economic perspective.

When supply is disrupted, or indeed if demand surges without stimulating adequate supply, price volatility is to be expected. In Chart 1 below we demonstrate changes in the oil price over time. This shows that a 15% rise in the price of oil isn’t out of character and the higher level seen this week is still well below previous highs. Prior peaks have occurred when excess demand or shortage of supply is evident. At these times the market is out of kilter.

One reason why an oil price surge gets a lot of attention is that recessions have typically followed soaring oil prices.

Putting this worry into context, oil prices need to rise very substantially before a recession occurs, usually doubling before growth pressures are exerted. 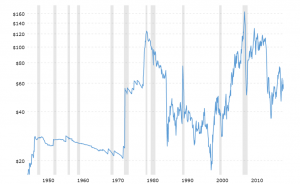 Another aspect is the effect higher oil prices have on the rate of inflation. Oil represents an input cost. It is needed to produce goods and as a fuel for transport. Ultimately it seeps into supply chains and influences output costs. Businesses then seek to pass these costs along in the form of higher prices to consumers.

Oil-induced price inflation acts as a tax on consumers, eroding purchasing power and reducing the affordability of many goods. This holds back demand causing economic output to falter. The 1973 Oil shock is the most cited example of this happening. Over a period of six months the price of oil rose by over 300%, punishing global growth in its wake and pushing up the price of goods and services. This produced an economic phenomenon known as stagflation.

We do not foresee stagflation associated with recent events. Whilst we are not diminishing the gravity of this weekend’s events, unless a monumental degradation of the situation occurs, the extreme nature of the 1973 Oil Shock is unlikely to be repeated in 2019. The fundamentals of supply and demand, as we will explain, are very different from 1973.

b) Production and Consumption of Oil

According to figures produced by the United States Energy Information Administration (EIA), the globe has experienced something of a glut in oil supply.

Since 2014, oil production has consistently outstripped consumption, as seen in Chart 2. According to the most recent figures the gap between production and consumption is around 1 million barrels per day. 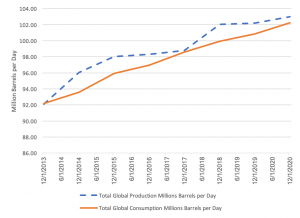 Oil as we know is subject to the laws of supply and demand. This means the effect of continuous over-production is borne out in the price. For example, between Dec 2013 and Dec 2015 production ran well in excess of demand causing prices to drop precipitously; as seen in Chart 3 below. During this period the oil price fell from $112 to $35, a price fall of 69%.

After the 2013/15 price collapse the oil market stabilised. Prices started to climb back, reaching a peak of $83. In other words, prices responded positively to supply and demand converging.

The significant decline in the price between 2013 to 2015 is notable because it coincides with the early stirrings of the US Shale oil revolution. Advances in oil recovery technology earlier in the decade has turned out to be a game changer in the US. More and more oil from this source, and in a stable region, has been highly influential. Prices are operating in a much narrower band with shale supply responding quickly to price rises and falls.

In Chart 4 below, increased US shale oil production stands out. Supply from this source has surpassed all other oil producing countries and, contrary to what many analysts predicted, it shows no signs of exhaustion.

Attempts by the Organisation of Petroleum Exporting Countries (OPEC) to shoot the Shale Fox have largely failed. OPEC set out to ramp up their production, hoping lower prices would fall driving shale producers out of business. They anticipated that high start-up and elevated production costs of shale operations would drive them out of business when prices fell. This strategy failed because shale producers found ways to lower their costs through enhanced recovery techniques. As a result, they now operate more nimbly and are have the ability to respond to price undulations faster than traditional producers. 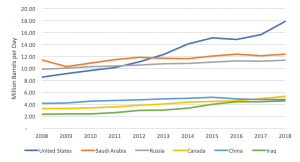 Consumers’ resistance to depleting natural resources, and the harmful waste by-products that occur as a result, has grown. This sits alongside government policies that seek to regulate fossil fuel usage. Both shifts taking place seem destined to take the world’s reliance on oil lower as time progresses. Consumers are demanding improved energy efficiency and their awareness of their own ‘carbon footprint’ is growing. Governments have policies to phase out the production of vehicles powered by diesel or petrol engines in favour of electric cars. Likewise, the costs of energy generated from renewable technologies continue to fall and will further reduce the world’s reliance on oil.

Excess supply is unlikely to abate any time soon. However, energy markets, as we have shown in graphic detail, are volatile. There are numerous conceivable outcomes following the events of last weekend. Rather than come up with a long list we have arrived at two possibilities;

We accept that verbal attacks will however continue and possibly escalate. The religious and strategic animosity between Saudi Arabia, a long-standing US ally, and Iran will not disappear anytime soon. Rising tensions between the US and Iran over the latter’s nuclear policies haven’t helped. A US military response mooted by Trump in his ‘locked and loaded’ tweet would be deeply damaging politically. Increased economic sanctions and ongoing diplomatic pressuring look more probable.

Oil reserve releases and excess supply should cushion the impact of any price rise.

Trump has an election to win; ruling out direct military confrontation with Iran.

Saudi authorities have been diligent in seeking to rectify the effects of the attack.

With investing, your capital is at risk. Investments can fluctuate in value and you may get back less than you invest. Past performance is not a guide to future performance. Tax rules can change at any time. Please be aware this communication should not be considered as financial advice.